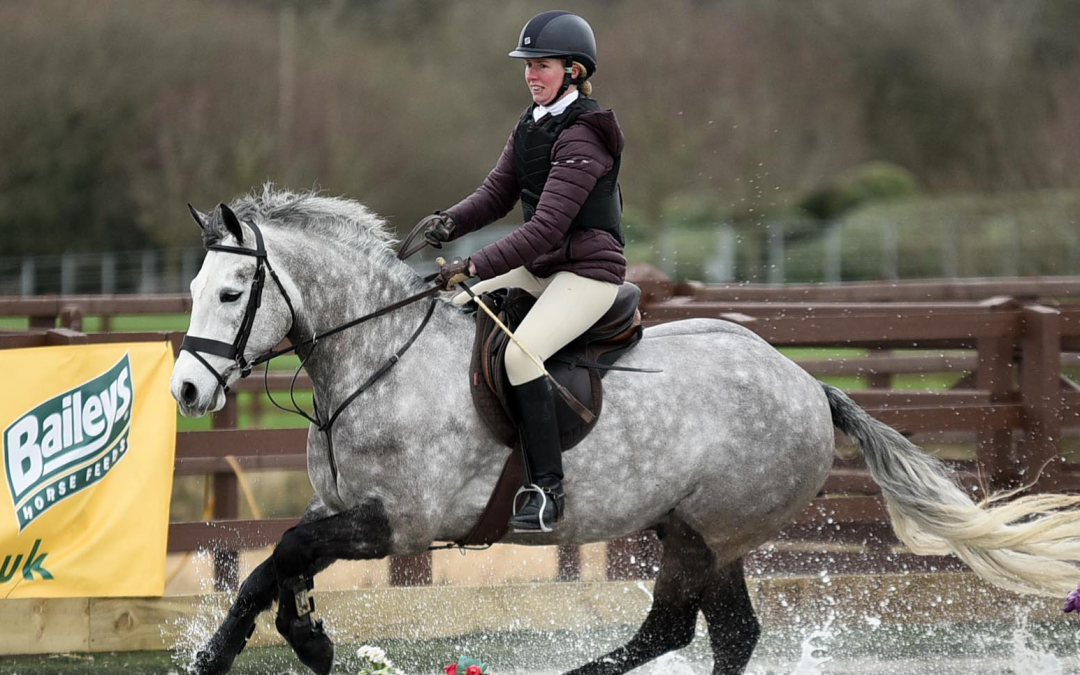 Competitors at week four of the Baileys Horse Feeds Flexi Eventing had to contend with a windy start although, thankfully, it was short lived and the sun was out for most of the day.

There were quite a few new combinations in attendance, with some of them featuring in the top placings.

The most eye catching duet in Intro ‘A’, as far as Judge, Jacky Reid, was concerned, was Masters’ student, Aislinn Captain, riding Cindy Cunningham’s six year old appaloosa gelding, Comanche Arrow, who finished on a score of 70.5, one point clear of Johnny Hagan and Buddy.

Commanche Arrow is definitely a ‘rags to riches’ fairy tale. Cindy and Stan Cunningham are well known for their love of appaloosas and ‘Little Arrow’ was one of a group of six bought by the Cunninghams from a farm that had fallen into financial difficulties. Sadly, he was in very poor health but with their devotion to the breed and, indeed, to horses generally, the husband and wife team nursed him back to good health and this was only his second competition so we all look forward to following this combination’s eventing journey. Johnny Hagan’s Buddy is a six year old grey gelding by Chillout, the same sire as Andrew Nicholson’s 5* horses, Swallow Spring and Bonza King of Rouges. He competed last year with Suzanne Hagan in the driving seat at the Balmoral Young Event Horse class. This is another exciting young horse which will be debuting his eventing career this season.

The ‘B’ section, judged by Lucinda Webb Graham, saw Kathryn Henderson rise to the top on Betty, her ten year old Builder’s Delight mare which she has been competing under Eventing Ireland rules for the past four years. They scored a very impressive 73.3 with Margaret Creighton occupying her usual second position on La-Di-Da.

Joanne Jarden cast her critical eye over the twenty one starters in the Novice class where she awarded her best score to Charlotte Dixon and Zermie,  Barbara Dixon’s eighteen year old Dutch bred gelding who were making their first Flexi appearance. Denis Currie and Arodstown Aramis had to settle for second place, just fractionally behind.

Helen Faulkner and Ann Cunningham’s Derryvane Danny shone in the Intermediate class with a score of 71% followed one point behind with Izzy Riley on her mother’s DHI No Fear, a seven year old gelding by the Dutch stallion, Nonstop.

Once again, the showjumping and cross country judges were kept exceptionally busy all day although in both cases it seems to have been a day of ‘4 faultitis’ with the results showing a smaller ratio of clear rounds than normal.

Sincere thanks go to all the Officials and volunteers on the day who did sterling work to ensure that all three phases ran like clockwork.

Dressage entries for 8 February must be with Dora by 5pm on Wednesday.