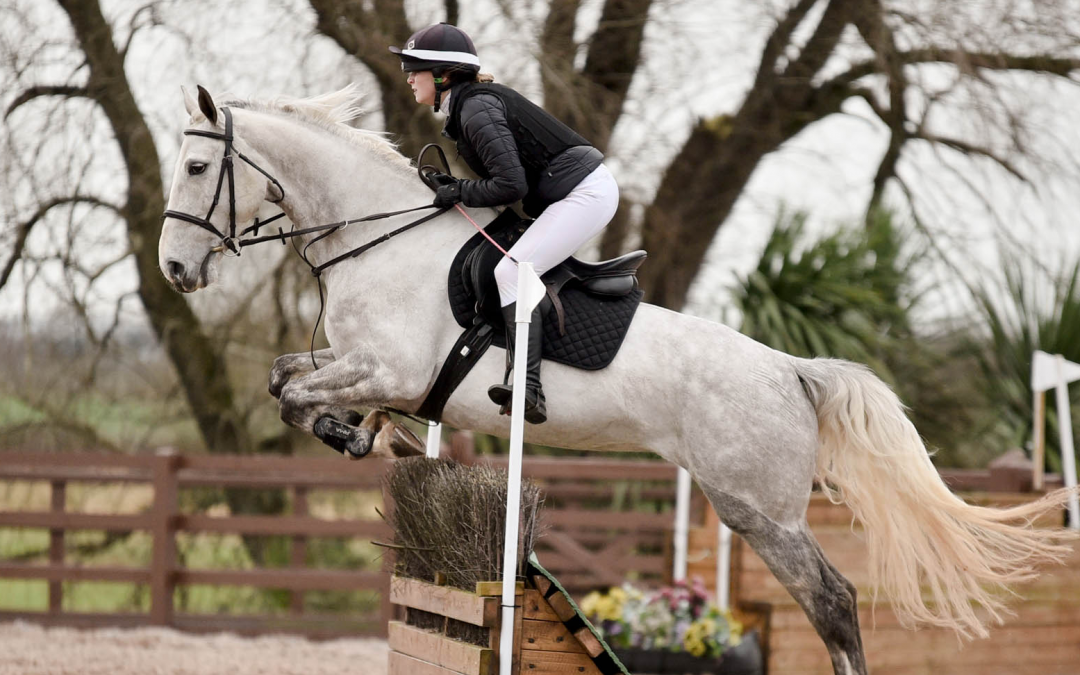 It was a case of normal play at The Meadows for the penultimate leg of the Baileys Horse Feeds Flexi Eventing despite the threat of Storm Ellen. While there were certainly occasions of wind, rain and piercing cold, the diehards carried on regardless, chasing those all important points.

Once again an Intro entry of over thirty required a class split and Lucinda Webb-Graham very kindly judged both classes. The combination which caught her eye and was awarded 74.8 % in the ‘A’ section was regular campaigner, Nicky Nesbitt with her very precious Irish Draft mare, Carrickview Saratoga with which she competed in the EI90 Amateur class for the last two years. Margaret Creighton occupied what seems to be her permanent position of second on her seven year old Clover Echo mare, La-Di-Da.

Meantime there is still great friendly rivalry in the McKeever household where Shane took top honours this week in the Intro  ‘B’ section  with his fifteen year old Master Imp gelding, KHS Impact, replicating his second week performance. His wife Sharon, who won in the inaugural week and who has gained a number of top six placings had to settle for fourth on this occasion. Second place was shared between Nicola Martin riding Armpit which normally has Nicky Corr at the helm and Holly McClenaghan with her five year old Obelix mare which is already showing great form.

Veterinary Surgeon Rosie Alcorn, who has recently returned to Northern Ireland had a busy day on Saturday with three dressage entries and numerous showjumping and cross country rounds. She certainly clocked up a good result in a strong Pre Novice class under the watchful eye of Judge, Janet Hall where she topped the leaderboard with Bella on a score of 73%. Bella is a seven year old, bred by John Reid, from his stallion, Centrestage out of Renkum Blaithain and was actually presented to Rosie as a foal for her 21st birthday because she was a full sister to Fiorella with which Rosie competed Nationally and Internationally between 2011 and 2016. Runner up was Lois Thompson riding Jackie Harris’s KC (Rubane Oldtown Cruise) a six year old gelding by Oldtown KC which competed last year under Eventing Ireland rules.

Denis Currie was back on winning form in the Novice class, judged by Angeline Nicholson, with his faithful and consistent steed, Arodstown Aramis where he was the only combination to break through the 70% barrier. Second place went to a delighted Alex Cleland and her nine year old Beach Ball gelding, Rafa Smash with which she evented as a junior last year.

There were just seven starters in the Intermediate class with Ella Boyle accounting for three of those. She took the win under the careful scrutiny of Angeline Nicholson, with Candy 737, a mare by Captain Fire which last competed at Tattersalls in the 3* U25 class. Hannah Blakely came in over two points adrift with Clerkson, her nine year old gelding by the Sadler’s Wells stallion, Clerkenwell.

Entries were well up in both Show Jumping and Cross Country where the 1m class was particularly well subscribed. There is always a great variety of fences used in both arenas and the courses are gradually increasing in technicality each week. The 1m, 1.10m and 1.20m showjumping competitors had a treble combination to contend with this week as good preparation for the imminent start of both showjumping and eventing.

Next week is the final of this very successful league, very kindly sponsored by Judy Maxwell of Baileys Horse Feeds. The prizes for the top 15 will be presented the following week, March 7th.

It was hoped that the competition on that date would take the form of a Mini One Day Event with dressage moving onto the grass arenas and the Cross Country occupying both Arenas 1 and 3. However, with the very considerable rainfall over the last few weeks and more forecast, this will not be possible so our competition on 7th March will retain the same format as that used for the Baileys Horse Feeds Flexi Eventing League.

As ever, our sincere thanks go to all the volunteers who braved the cold, wind and rain to fulfil the full range of duties required to keep our competitions in all three arenas moving smoothly. We really are very lucky to have such a willing and efficient group of helpers.