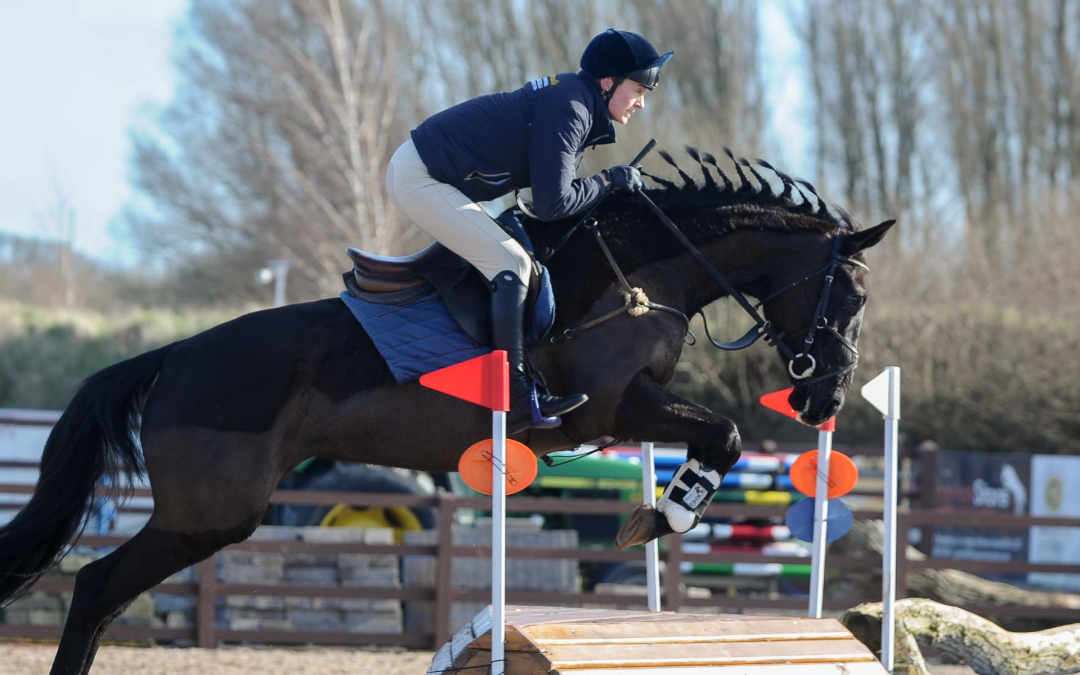 The excitement was tangible at The Meadows on Saturday for the much awaited final of the Baileys Horse Feeds Flexi Eventing Series. Not even the threat of a fourth storm, Jorge, in as many weeks could dampen spirits. In fact, the weather was actually pleasantly good with the morning mostly filled with sunshine, punctuated by a few showers in advance of the winds which started to gather speed by early afternoon.

As usual, large entries in the Intro section required a class split. Angeline Nicholson was in charge of assessing the ‘A’ section where she reserved her top marks for fourteen year old Anya Teuton, riding her mother’s Lisrua Star, a ten year old mare by Coral’s Misty Bobby. This combination went on to gain a double clear showjumping as well as a clear cross country round. In fact they have competed in all eight weeks of this League, gaining five top six dressage placings, including two firsts as well as clear cross country each week plus a number of double clear showjumping rounds. This is a fabulous achievement by any standard but particularly from an athlete whose horsemanship belies her tender years. This consistency meant that Anya accrued sufficient points to position her sixth in the League overall. There was a tie for second place in the ‘A’ section between East Down Pony Club member, Lauren Madine with her seven year old Connemara pony, Moonshine Melody by the stallion, I Love You Melody and Ella McAllister riding Suzie who finished on a score of 64.3%.

Coreen Abernethy cast her eye over the eighteen strong ‘B’ section where she was most impressed by Holly McClenaghan with Homegrown Beatrix (Bea), a five year old by Obelix out of an Amiro M mare. This partnership have clocked up two wins and a runner up position over the course of the League. Another consistent performer was Lara McRobb and Cheska who settled for second on this occasion but took thirteenth overall in the League.

Sarah Sproule rose to the fore in the Pre Novice class which was judged by Lucinda Webb-Graham with Ballyneety Rainbow, her six year old bay gelding by Butler’s Cravat on which she competed last season under Eventing Ireland rules. Margaret Creighton and La-Di-Da, occupied their usual spot, one place down from centre podium, a position they adopted on no less than six occasions during the League.

Dublin based FEI International Eventing Judge, David Lee, returned to the Meadows to take charge of the two top classes. He awarded an impressive 77.5% to Denis Currie and Arodstown Aramis , a duo which then went on to compete in the two jumping disciplines which garnered them sufficient points to climb to the top of the leaderboard with a margin of half a point. He will be crowned the 2020 Champion at the prizegiving next week with Nikki Cullen settling for runner up . Ella Boyle, who was competing four horses this week claimed second place with Vogue (WKD Cooley), a ten year old mare by Contador who had a number of Eventing Ireland wins last season. For the second week running, Ella also claimed the red rosette by a large margin in the Intermediate class with Candy, a twelve year old Captain Fire mare which is just returning from injury. Helen Faulkner who claimed the final prize in the League overall, took second place on Ann Cunningham’s Derryvane Danny.

Showjumping and Cross Country were busy all day with ‘four faultitis’ continuing to plague many competitors.

A huge thank you goes to Judy Maxwell of Baileys Horse Feeds for her generous sponsorship as well as her attendance every week of the League.

Thanks, too, to every single official who has been on duty in some of the worst weather conditions over the past eight weeks. We are very blessed to have a superb team who work professionally to keep the cogs of this League in motion. In the course of the eight weeks, we had over 700 different combinations competing. There were 800 dressage tests completed, 1900 rounds of showjumping and over 550 cross country rounds which represents fabulous support from the equestrian community who appreciate that the facilities at The Meadows provide a first class educational opportunity at the start of the season.

This coming Saturday, 7th March, there will be another Flexi Eventing day, open to everyone. Please text dressage entries to Dora on 07876758979 by 5pm on Wednesday.

In the event of equality of points after the eighth leg of the League, the following criteria was applied: