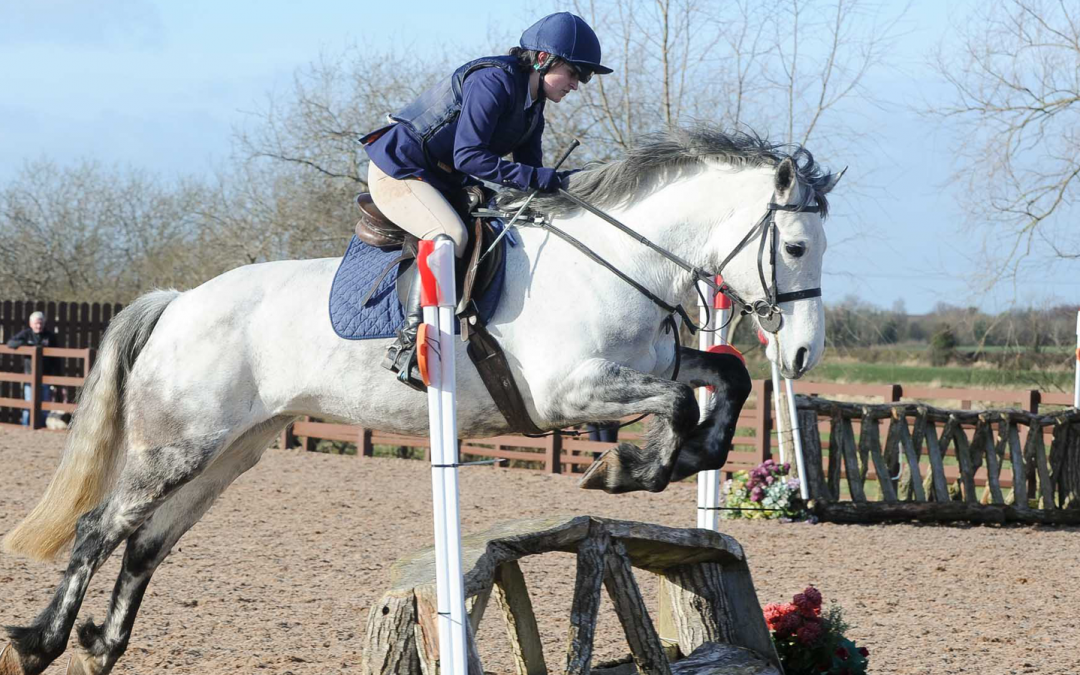 Denis Currie was crowned the Baileys Horse Feeds Flexi Eventing Champion for 2020 on the last day of the current Series run jointly by Eventing Ireland, Northern Region, and the Meadows Equestrian Centre. During a fifteen minute break in proceedings, the presentations to the top fifteen placed riders were made by Judy Maxwell of Baileys Horse Feeds, the very generous and supportive Sponsor.

Points were accumulated over the eight weeks of the League and Denis Currie and Arodstown Aramis snatched victory by a half point margin from Nikki Cullen and Danske Coevers Lass.

Meantime, action continued on Saturday with another, non-League, Flexi Eventing day, giving competitors from all walks of equestrianism another opportunity to get ‘match fit’ before their season begins.

Will McAuley had the pleasure of judging the 29 starters in the Intro class where Johnny Mulligan topped the leaderboard on David McClurg’s Ciderman, an eight year old gelding by Loughehoe Guy which was making its first appearance in a dressage arena. The runner up was Jon Champion riding Garrybritt Orbis Coin, his thirteen year old gelding by the Thoroughbred stallion, Orbis.

Johnny Mulligan certainly had a busy but a very successful day, claiming his second win in the Pre Novice section under the watchful eye of Judge, Janet Hall. This time he smashed the 70% barrier on board Courtney Stewart’s, Vino, a five year old by Follow Me, out of a Hanoverian mare. The Stewart family from Gransha Equestrian Centre bought Vino from Holland earlier this year and Courtney has been spending the time since getting to know this young stallion and is very much looking forward to producing him to realise his full potential. Sixteen year old East Antrim Pony Club member, Lauren Carville, occupied the runner up spot on Rosie (Castlelodge Osmium Rose) and they also took 11th place in the League overall out of 702 participating combinations.

Denis Currie and Arodstown Aramis, proved their League Championship title was no ‘flash in the pan’ as they, once again showed their consistency with a win in the Novice class which was also judged by Janet Hall. Another very consistent duo, Alex Cleland and Rafa Smash,  finished one and a half points behind with a result which reflects a lot of hard and painstaking work over the past couple of years.

There were just two starters in the Intermediate class where Alex Houston had a run away victory on Skyfall Echo, her twelve year old Clover Echo mare which she last evented at Camphire International in 2018. They scored 78.5% against another fabulous score of 72.5% awarded to Helen Faulkner and Derryvane Danny.

The Showjumping Judges were kept particularly busy as many SJI members were out to gain that important practice before the start of the registered shows at The Meadows this incoming week.

As always, thank you to the army of helpers who braved all kinds of weather over the nine weeks and to all the competitors who supported this very popular series of Flexi Eventing.

Huge thanks, too, to our faithful Sponsor, Judy Maxwell for everything she does for our sport.

Eventing Ireland action moves to Tyrella this coming Saturday for the Annual Two Phase event prior to the start of the eventing season the following Saturday, 21 March.